Waited a hundred years to see your face

And I would wait a hundred more

If only to be near you

To have you and to hear you

Isn’t that what time is for?

My grandmother in the late 1920s/early 1930s.
(Slightly squiffy because I had to take the photo of the photo at an angle to remove the glare!)

Today has been a special day, an anniversary – a request – that you play your piano as the evening sun slowly sets.

I never thought I’d get this old dear, never had a reason to live so long

And the Lord’s been like my shadow even when I was wrong.

No, I never thought it would turn out this way.

A birthday, with apologies for the tears and regrets and I’ve always saved your poetry for these years when you forget.

I never thought I’d get this old dear, never had a reason to live so long,

And the Lord’s been like my shadow even when I was wrong.

No, I never thought it would turn out this way.

So sing with me softly, as the day turns to night and later I’ll dream of paradise with you.

I love you and goodnight.

Just before I moved here I went to visit my grandmother for the last time.  I was leaving for two years, with little intention of coming back to Britain until my contract was up.  She was 99 years old, living in St Luke’s Hospital in Oxford, where she had spent the last two years since falling and breaking her hips.  The likelihood was that I wouldn’t see her again, or be able to go to her funeral.  I visited her with Dad, fed her chocolate buttons, showed her pictures of her garden (a little overrun, but flowering nicely) talked about some of her great grandchildren and held her hand.  Sometimes she didn’t recognise me, but then she would have a little sleep and when she woke she had her same cheeky smile and occasional pursed lips.

In some respects I was right, I wouldn’t see her alive again, but I did see her shortly after she died – the death certificate said old age – I stroked her hair and helped my aunt and uncle clear out her room.  I did get to go to her funeral; she was cremated in a woollen coffin which fitted well with her almost constant knitting.  She would make patchwork blankets with brightly coloured squares to send to Africa.  She said that they liked bright colours over there – true, but I’m not sure they would place that shade of pink next to that shade of green – and although it’s probably 3 years since she last made one and sent it off to Oxfam, I still keep catching myself gazing out of the window as I drive through places to see if I can spot one of hers.

Wednesday, 12th December 2012, would have been her 100th birthday.  At 12 minutes past 12 many of the family are going to have a little pause and remember her.  I’ve been thinking about her, and Dad, a lot recently and so thought I’d write a little something down.  The song at the start of this post has been playing in my head for days and days so I thought it might be a good one to start with.

When I was about 12 my mum suggested that I should go to Oxford to visit my grandmother and interview her about her life.  I didn’t.  I was 12.  I should have really.  I did get little snippets from her here and there but never a complete picture.  Hopefully my relatives will leave some posts filling in the gaps for you to find out more…  So here are a few little bits and pieces to mark her centenary, I don’t want to write a full life history, there are others that could fill that in far more eloquently than I could and I wrote out some memories on the day she died.  Instead I wanted to show some pictures that I’ve found along the way to cover a century.  Any inaccuracies are, of course, my fault.

She had many names from many people. Her unusual middle name was after her father’s parish – St. George in the East in East London. Her parents were Rev. Fredrick St. John Corbett and Elsie Corbett nee. Askew.  She was the third of 4 children, older sister Mabel, brother Jack and little brother Hugh.  Her father died of pneumonia, a complication from the Spanish flu epidemic after the war.  When I visited Dublin I took a picture of his memorial on the wall of war dead at Trinity College as she’d not been there for many, many years.  She kept the picture on her mantelpiece for a while but I’m not sure where it’s gone now. 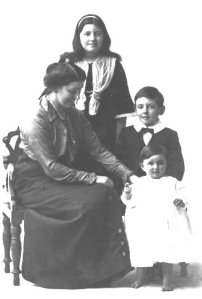 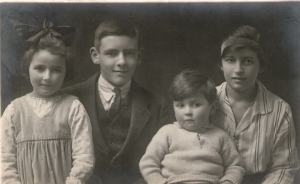 Dressed as the tortoise for the Hare and the Tortoise. Slow and steady summed her up well.

As her mother was widowed with 2 almost grown children and one baby, Molly was sent to live with family friends.  This could have been a catastrophe, but she loved it and made friends that lasted a lifetime.

She met my grandfather in Oxford and they were married in Brading Church on the Isle of Wight.  Their honeymoon was in Cornwall and they settled in Oxford; my grandfather, Doctor Ian Pyle Watson Skinner (yes, our family has a thing for middle names, you don’t know the half of it) had a surgery on Iffley Road. 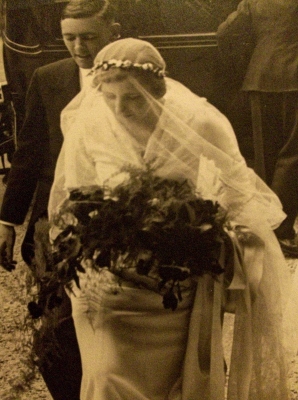 They had two daughters and two sons, Jane, Mary, Finlay and Donald (my dad).  She contracted measles in 1947 and had a near death experience.  In the late 1990s she wrote to one of her friends to comfort her about her father’s death and outlined her experience.  I don’t currently have a copy of what she wrote, if I do, I’ll update this post, but basically she was heading towards the light, but it wasn’t just light, it was peace, warmth and love, but she heard someone telling her to return because it wasn’t her time.  In 1948, my dad was born.  We wouldn’t be here if she’d not followed the voice’s instructions.

Molly with Mary and Jane.

Various family members in the garden 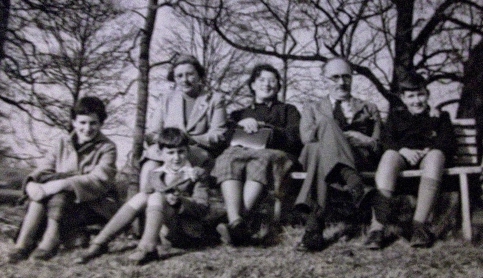 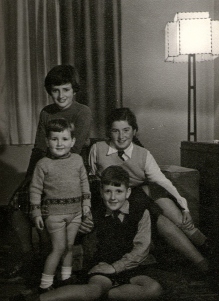 That picture (probably taken in 1952) was re-staged in the same chair, with the same lamp in about 1987, this time with my brothers and sister:

Skinner children in the 1980s:
Ellie (me) Alex, Richard and Ian

And again this year with her great grandchildren from this side of the family: 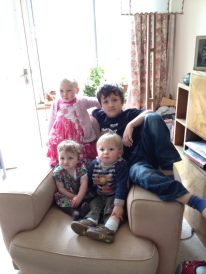 My grandfather died in 1974 and she moved out of the house on Iffley Road and in to 117 Fairacres Road.  It had been her sister’s house and her mother’s before that.  She lived there until she had to move into the hospital.  It’s been a sad job for everyone involved in emptying it, but hopefully we’ve each got something to remember the house and the happy little woman that lived in it.

A selection of pictures, no doubt with more to follow once I’ve found them/been sent them.

With great-grandchild, a 93 year age gap. 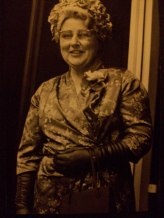 Another wedding (I think Jane’s but will check) 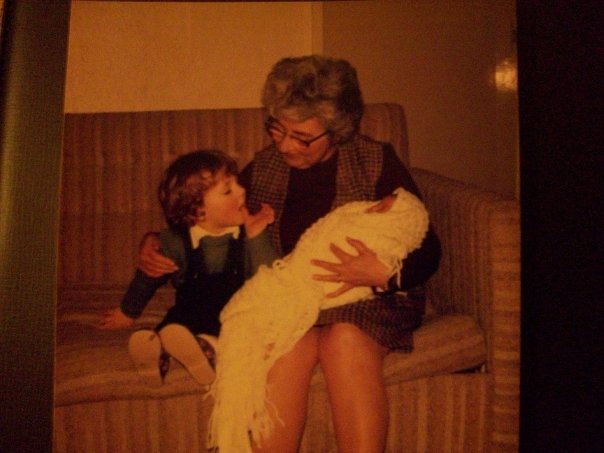 At spot of lunch aged 94

At grandson Simon’s wedding with grandchildren Ian and Alex and daughter Mary in 1986.

I found this poem in one of the books in her house on the day I was clearing out Dad’s things:

Saying goodbye for the last time

I knew this house, all its complexities.

I knew each crack and every spider’s place

and boards bounced far too much, I knew the score

would always favour that destructive spore.

And yet with all its perverse waywardness

this house was a home. I made it what it was

with drill and trowel and nail, but those who came

and filled it with their laughter made its name.

its best and worst, I loved it as it stood,

and leave it with regret and gratitude.

And since she liked the Eva Cassidy album I gave her years ago, here’s another one to end on:

I know you by heart

Midnights in winter, the glowing fire

Lights up your face in orange and gold.

I see your sweet smile shine through the darkness

Its line is etched in my memory

So I’d know you by heart.

Mornings in April, sharing our secrets

We’d walk until the morning was gone.

The joy gave me lives on and on

‘Cause I know you by heart.

I still hear your voice on warm summer nights

You left in autumn, the leaves were turning

I walked down roads of orange and gold.

I saw your sweet smile, I heard your laughter,

You’re still here beside me everyday

‘Cause I know you by heart. 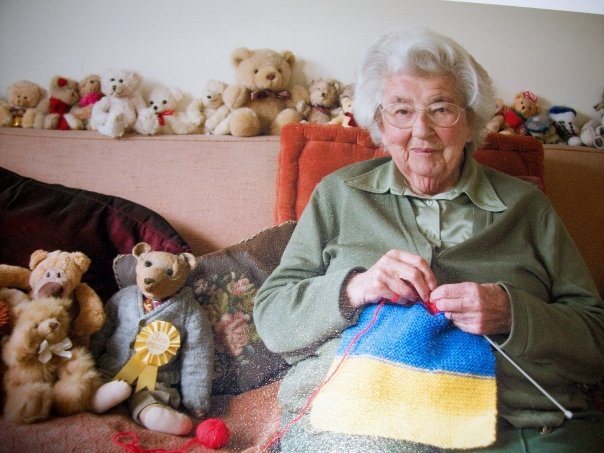 Portrait taken about 5 years ago by the man in the chip shop. It now remains the enduring image of Molly.