Now that I’m entering my final months of this stint in Tanzania there are so many things that I want to do but don’t have the funds for at the moment. I’m almost half way through our Easter holiday and I was hoping to go to Gombe Stream National Park to visit the chimpanzees but the ‘death money’ hasn’t come through, so I’ll se staying in Mwanza. I would love to go white water rafting in Uganda, or to see the gorillas in Rwanda, take the train from Dar es Salaam to Zambia to see Victoria Falls, but it’s not going to happen on this trip. Even if I stayed on for a further year I don’t think I’d have enough cash and time to do all of these things so there’s no point in getting annoyed and feeling like I’ve missed out.

There is plenty that I have done in the 6 months that I’ve actually been here, however. I‘ve been to Zanzibar, to Tanga and Pangani on the Tanzanian Swahili Coast. I have driven through ancient landscapes down to Shinyanga, across to Arusha, seen Mount Kilimanjaro, up across the border into Kenya. I’ve fed giraffes, been tickled by an orphaned elephant, snorkelled in the Indian Ocean, met fishermen and Maasai, been stupidly sunburnt (even in the shade), eaten fresh octopus and fish straight from the ocean. I’ve been to one of the most important archaeological sites in Kenya and watched monkeys play for half an hour. And last weekend I went to the Serengeti.

“Serengeti takes its name from the flat grassland plains that cover the eastern section of the park next to Ngorogoro, which the Maasai called siringet, meaning ‘endless plain’. Along with the Kalahari, these plains are the Western imagination’s archetypal African landscape and the highlight of many a visit, certainly when the migration is in full swing… In the hilly centre, around Seronera, a series of lightly wooded valleys provide excellent year-round game viewing…
“To the west, another corridor of land runs along the Grumeti River to within 8km of Lake Victoria. The river’s flanking evergreen forests are another special habitat, providing a home for primates as well as lurking leopards, whilst the river itself and its swamps are as perfect for water birds as they are for crocodiles…
“The Serengeti owes its hallowed place in our imagination to the annual 800km migration of over 2.5million animals, the largest mammalian migration on earth. A continuous milling, unsettled mass, including almost 2 million wildebeest and close to a million other animals, the migration offers one of nature’s most staggering displays…”
The Rough Guide to Tanzania.

As we were picked up in our safari car with extendable roof, I wasn’t sure what to expect from the Serengeti, apart from an abundance of wildebeest, zebras and probably a couple of giraffes and elephant or two. From all reports entering the Ngorogoro Crater, due to be visited on the second day of our three day trip would be like entering the Great Valley from the film ‘The Land Before Time’, but I had few preconceptions of the vast plains.

I packed four sets of batteries for my woefully poor camera (I have since bought re-chargeable ones to be a bit more environmentally friendly). It takes a couple of hours to get to the Serengeti gate closest to Mwanza, Ndabaka Gate, so we had a shot of whiskey and watched the scenery rush past, first the busy streets of Mwanza, the villages I’m familiar with from trips out at weekends, then rice field, fields and eventually we reached the gate. A quick toilet stop allowed our driver to fill in the paperwork and pay for us – $50 for non Tanzanian citizens to enter the park for 24 hours, with an additional $30 each to stay overnight. (It’s a much better deal for Tanzanian citizens as for adults it costs 1,500 Tsh, which is about 60p, for the day, but I’m not sure how many are able to take up this offer). A sign greeted us warning us not to stray ‘Caution! Do not get out of the campsite animal may attact human being.’ [sic.]

The welcome sign that greets travellers to the gate to the Serengeti.

Within metres of having passed through the gate we came upon small herds of impala grazing near the bushes, a family of baboons casually crossed the road in front of us, barely acknowledging that a large 4 by 4 was headed their way. I spotted some horses in the distance and then realised that they were in fact a herd of zebra. We sped through the grasslands standing on our seats, holding steadfast with one hand to the rail that ran around the open roof and taking pictures with the other. At one point I spotted a monitor lizard about 1.5m long hiding by the side of the road and our driver reversed to let us see it clearer, only for it to scuttle off into the safety of the grasses. Before the end of the day we had notched up sightings of the ‘who’s who’ of Tanzanian wildlife – impala, eland, Thompson’s gazelle, wildebeest, hartebeest, zebra, giraffe, elephants, dik dik, hyena, buffalo, hippo, baboon, vervet monkey (yes, we have them at school, but it’s better seeing them in the wild with all the others), tortoise, topi, hartebeest, crocodiles, African fish eagles, secretary bird, lots of other birds that I don’t know the names of, ostrich, weaver birds, bat-eared fox, banded mongoose, warthog and, eventually, a male lion.

The lion didn’t do much, just sat in the shade of a small tree, wafting flies with a shake of his head and watching distant zebras milling about. This is where my camera was really tested, most of the other animals we’d seen had been close to the car, this one required a zoom, but since I only have a little Nikon, the pictures aren’t as clear as I’d like. But I got some nonetheless. And I got to watch a lion sit around in the wild, which is a pretty cool thing to do.

Male lion in the Serengeti

Lazing in the shade.

After watching him for about 15 minutes we drove off leaving him in peace only to spot a far off family of elephants grazing in the distance. We were quite happy to watch from afar but our driver began zooming backwards, spun us around and took us off in pursuit to get a closer glimpse. Although the ‘off road’ track was well worn, this is the start of the rainy season and so some parts of the track were flooded or highly muddy. This didn’t put off our driver, however, he was rallying around, at one point we were driving sideways through mud and he was casually chatting on his phone. Having been standing up through the roof for all this, I feel that I may be quite good at windsurfing in the future. But his driving skills paid off – what seemed like an enormous detour in the wrong direction actually brought us slap bang into the middle of the group, who were walking across the grass towards us. One large male decided that we were in his way, gave a loud low trumpet, he started moving towards us, his ears flapping frantically. As we were crying out ‘he’s going to charge us’, our driver sat laughing. He knew that the elephant was just warning us to shift so his family could cross but we did think, as first time safari goers, that we were going to be rolled. But as the bull elephant drew closer to us, the car started up and we drove off to about 10m away, allowing the elephant family to cross the road peacefully.

Further along the main road we came across a family of giraffe grazing by the side of the road, one was taking a drink, which is one of the most amusing things you can see a giraffe do. A pair of ostriches, male and female wandered past, again completely ignoring the 5 humans and large car in their midst. Just before lunch we were taken around to the swollen Grumeti River, where we saw a large crocodile escaping into the river and a fish eagle – enormous – standing on the opposite bank looking for food. 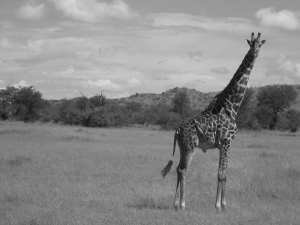 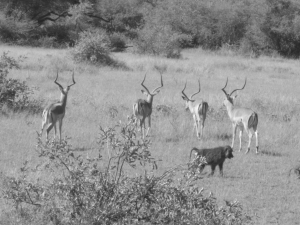 Standing in the car getting driver’s arm sunburn.

It’s hard to explain quite what it feels like driving around this amazing place, at some points it seems like a wildlife park at home, sometimes like a mechanical ride as you follow the track that leads you tantalisingly close to the animals before swerving you away, but other times… Other times you can be driving along with no sign of any living creatures when the movement of the car will disturb a few birds in the bush alongside you. As they fly up into the air and fly alongside the car, or in front of it, that’s when you really feel like you’re in the middle of a BBC Natural History documentary and it takes your breath away. Not just the movement of the birds, but the colours, their speed, the scenery passing behind them and the wind in your face. It’s almost like being in a different world.
We were about 15 minutes drive from our lodge when our driver gave us two options, go straight there and get cleaned up – I had mud splattered all over me from our drive around the park – so of course we opted for more driving. After about ten minutes we came across a hippo pool, with at least 20 hippos bathing in the shade of palm trees. Again, they were too far for any decent pictures from my camera, but on the other side of the car was a group of baboons. One was rolling around with his legs in the air, others picking at each others’ fur. 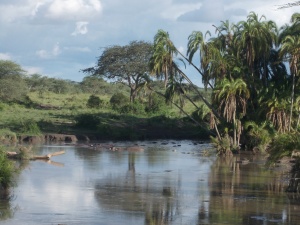 Hippos wallowing in the cool waters.

Rainbow over the Serengeti.