The first film I remember seeing at the cinema was when I was 5 years old. It was Disney’s The Little Mermaid.  I was amazed by it, immediately decided I wanted red hair like Ariel.  We went to McDonalds and I got an Ursula toy with my Happy Meal. It was 1989.

Some time not long after I was amazed to see the video in Ritz (as it was then, don’t think it had become a Blockbusters, or indeed a cafe at that point) and begged Mum to buy it for me so that I could re-live that magical underwater world at home.  Mum said no.  It wasn’t the film.  I disagreed, it had Ariel on the front and I could definitely read the words ‘Under the Sea’ there too.  Mum said it wasn’t, it was just in the cinema. I disagreed and must have pestered er for ages because somehow I acquired that video.  Of course it wasn’t The Little Mermaid, it was ‘Sing-a-long Songs Under the Sea‘ which did feature some of the Little Mermaid soundtrack, but also other vaguely water related Disney songs including one from 20,000 Leagues Under the Sea in which Kirk Douglas seems to be telling his shipmates about some sort of dalliance with a fish or two.  Mr Jim Causley has been known to do an amusing cover of this if you ever get the chance to see/hear it.  Ask him nicely.

My obsession with TLM grew and I was exceptionally jealous of my cousin Rebecca because she had an Ariel doll.  I even used to pretend to be Ariel when swimming at Brackley Pool – the pool has two sets of steps in the shallow end, if you swam around underwater, legs together because you are a mermaid with a tail, singing ‘Part of your world‘ to yourself and timed it right you could push yourself up the steps, breaking out of the water at just the right point to recreate the iconic waves/big stone moment.  To me, I was definitely a ginger mermaid, to everyone else I must have looked mental.

I’ve never been the strongest swimmer, I passed my badges at school but it took me about a day to do my 500m badge.  I think everyone else had got out of the poo, changed and spent all their change on Fox’s fruit glaciers by the time I got out. But I did it.

So coming to Thailand opened up an opportunity for me, to learn to dive.  The original plan (as much as I had a plan) was Bangkok, head north then loop around Laos, Vietnam and Cambodia.  Instead I’ve taken a rickety night train, theoretically a sleeper, but not so much when you are due to get off at 4.13 (less so when you get woken and then the train is delayed two hours) down to take the ferry to the island of Koh Tao.

I’ve never been on a sleeper train before, but all I could think of as I scootched up onto my bunk with it’s little green curtains was this:

As I was’t travelling with an all-female jazz band, this didn’t happen.  The more realistic view was this:

Eventually I managed to get to the ferry and this was the view of the pier that awaited me. 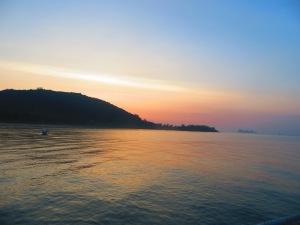 I was picked up at the other end by someone from Ban’s Diving Resort, I’d booked in Bangkok based on recommendations from other travelers and reading TripAdvisor reviews.

The course price includes 4 night’s accommodation and initially I was put I a dorm, but I was so knackered and wasn’t going to get any sleep so I asked and was moved to a single room.

Poli and Magnus were my diving instructors and I couldn’t have asked for better to help me start on my lifelong dream of becoming an almost mermaid.  I didn’t tell them that was my plan, I’m not mental.  But they might have read this now and would probably still have serious doubts about the possibility of that happening.  And rightly so.

Theory of diving, getting to know equipment, pool practise, then 4 ocean dives to get certified.  No flounders, no evil octopus sea witches, no electric eels or semi-drowning princes but instead an amazing array of marine life.  Just so you know, I took none of the following pictures, I was busy trying to be neutrally buoyant but we did see these: 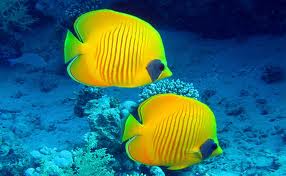 And so now I am a certified diver, with the aid of some compressed air I can breathe underwater, I can even do somersaults almost gracefully.   I’ve got a video on the way that I can show you one day.

If you happen to be wondering about this post title’s musical link, take a look here.

2 thoughts on “Dreams of breathing underwater”