Today I spent £20.  It seems extravagant, especially considering my accommodation for 6 nights is costing me about £11, but I think it was worth it.

You may agree when you consider that I’ve had lessons, 6 meals of tasty  and that it’s kept me off the streets and out of the sun (mostly).  I had Thai cooking lessons with Baan Thai Cooking.

I’ve had Thai food at home, mainly from supermarkets and out of a jar, so it’s been tasty but nothing special.  Today I’ve learned, that it’s really quick and easy and doesn’t have to be really stodgy, like some of the pre-prepared stuff is.

First off, after picking 5 dishes to cook, we had a trip to the market – not overly exciting for me, I’m quite good at markets and I’m currently living next door to this one.  But some of the rest of the group were guessing the veg, and getting confused by the different types of aubergine.  I took some time to take what I call Ikea style food photos – you know the ones, you buy a pack of them as postcards to put up in your kitchen in clip frames so that you look like you cook, even if you only eat takeaways and super noodles.  Admit it, we’ve all done it.  I even had them up in my kitchen in Tanzania.

See what I mean?

Whilst the staff prepared all the stuff for us to use later, we had the ritual putting on of the headscarf.  I looked like Yenta, the others just about managed to pull it off.

The first thing I made was stir fried prawns in curry powder, followed by fish cakes then hot and spicy soup.  We were then given about an hour’s rest to ‘have a nap’ but ended up chatting about the Khmer Rouge, The Death Railway and Dachau Concentration Camp.  But more on those another day.  Here’s the food: 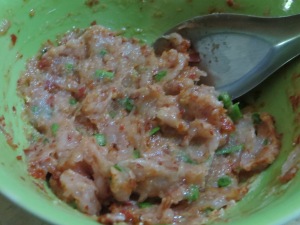 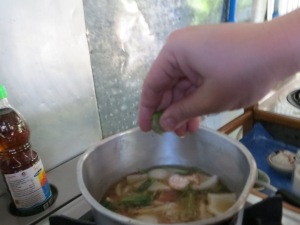 The staff were all really friendly, happy to show you how to do it and making jokes with us.  Obviously it’s a tourist thing, but they do it well and I’m a tourist so it’s not to be sniffed at.

We got given a cookery book to take away which outlines Thai seasoning, spices, herbs and vegetables, types of noodle and fruits.  It’s got loads more recipes than we covered and even more than were on offer to try out.   I will definitely be eating and cooking more Thai food when I get home as it’s really easy, although I think getting pre-made curry paste from Asian supermarkets would speed up that job.

One thought on “All that meat and no potatoes”