I’ve got a bit of a problem.  I’m totally in love with Mark Darcy and I can’t get him out of my head. There is a good reason for this, I’ve had a fair bit of bus travel lately and so have binge-read Bridget Jones’ Diary and am now over halfway through Bridget Jones: The Edge of Reason (book is far superior to the film, to me the film never existed).

Am now though thinking, and writing, about self as ‘self’, starting to wallow in self pity at lack of boyfriend and wanting to resort to urban family for support.  Unfortunately, urban family is spread across 3 different continents, a number of time zones, many are no longer singletons (although in no way smug about it) and I should be doing other things instead of pining about something that it totally impractical anyway.

So, reasons for being currently in love with Mark Darcy:

1) Is helpful in the kitchen and thoughtful at birthday (v.good) 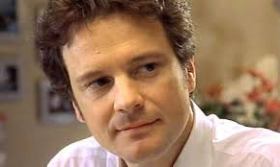 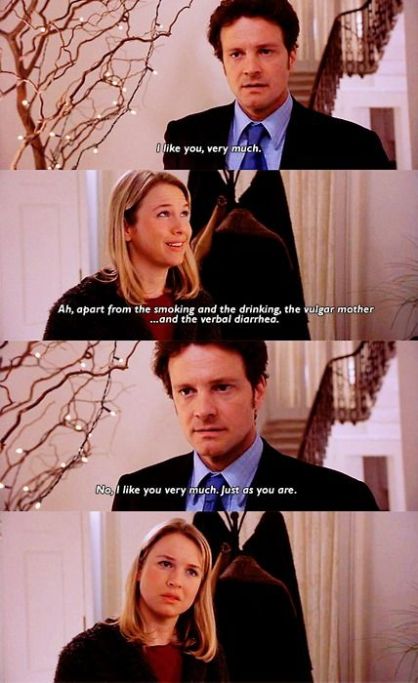 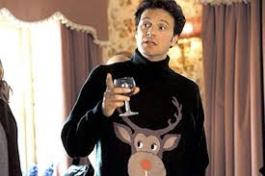 5) He gets all insecure about Bridget and he loves her.

6) Is fictional and so not likely to hurt me (but obvs. would never break up Bridget and Darcy, merely become Bridget.) 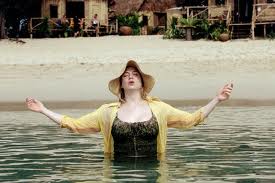 Here are some truths about me:

(especially when around someone I fancy)

And I have never owned a self help book, unless The Jane Austen Guide to Dating counts, and I really don’t think it does.

I’m not particularly good with relationships – actually, I probably am, but haven’t really had many [let’s say 2 and a bit] but keep picking the wrong people.  This, as I discovered with my counsellor, is because I’m a very loving and trusting person and am desperate to be loved back.  When I am with someone I think I’m a lovely girlfriend.  Unfortunately the last one actually said, and I’m not making this up in a Bridget induced fantasy, ‘If I can’t make it work with you then I don’t think I’ll make it work at all.’  A couple of months later I finally broke up with him (should have a long time before. v. v. bad) because:

The main problem with this plan is a serious lack of people who fancy me, which is incredibly annoying because my of my lady friends say that am marvelous and many men friends say I would make a good wife.  Which shall obviously take as compliment rather than males trying to force women into kitchen and domestic slavery.

The trouble with the Bridget books is that she actually has people who fancy (and love) her but she gets in the way and thinks about it all too much in manner of self help guru.  Having read the books first about 10 years ago (!) and often since, cannot help but fall into same thinking pattern – ‘building’ little things up into more than they are with someone then feeling like a right tit.   But this is a problem with me – I get to involved in some fictional thing and end up believing it’s part of my life.

1) Watched too much Ally McBeal, started stammering and touching hair in manner of Calista Flockhart and fell in love with Robert Downey Jr.  That love had NEVER gone.   Let’s just look at him. Hmmm. 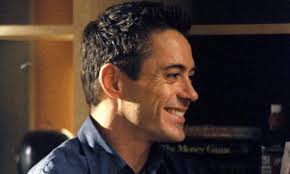 2) Watched a series of Alias in 2 days (22 episodes) left house believing was a spy for CIA and lipstick was a tracking device/stun gun engineered by Marshall.  Never take lipstick out of house when leave.

3) Watched too much West Wing (is there such a thing?) and am now expert on American politics and could run a congressional campaign.

4) As result of many years watching ER, Chicago Hope, House, Green Wing and Grey’s Anatomy (not to mention Scrubs) feel quietly confident that could perform a tracheotomy should one be needed in emergency and could diagnose Lupus correctly.

Shit. It’s not Lupus and I’m not a TV doctor.

Not sure am painting myself in a thoroughly sane light, but it’s just to show, I get a bit carried away.  And so am pining away for fictional Mark Darcy, willing him away from jellyfish Rebecca and back with our little Bridget.

In the meantime I am also pining over almost every relationship in Grey’s Anatomy – Meredeth and Derek, Cristina and Burke, Callie and Arizona, Cristina and Owen, Sloane and Lexi, Izzy and Denny, Izzie and Alex… all these ridiculously gorgeous people who can’t quite make it work (mostly) and yet still seem to go around having a ridiculous amount of sex in random hospital rooms.  That doesn’t happen for real people does it?  Certainly not to me. This is how I spend most of my evenings at home:

I’m considering doing internet dating again, but properly as I couldn’t really be bothered before, but whole thing seems v. depressing as then can be rejected by perfect strangers instead of just people who actually know me!

But perhaps the place to start is to think differently about one’s self when not with bastard ex who repeatedly tells you that you are too fat whilst buying you cheesecake and eclairs.  Mmmm eclairs.

As the song of the week says:

So when I get home and get somewhere to live I will take sometime to be me and dance around in my underwear, just because I can. 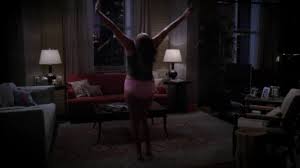 I will also find a job, make new friends, keep in touch with the old ones (hurrah for urban family) and

Should probably get back to doing something productive and try not to fall out of bunkbed. Oofff.