I am fascinated by body art in many forms.  In 6th form for my Sociology A Level my main project looked into why people chose to dye their hair, get piercings, tattoos and body modifications. I’ve been dying my hair since I was 12, got the top of my ear pierced at the same time, nose pierced at 15, ears at 18, which is also when I first bleached a section of my hair and used a non natural looking colour.  I got my lip pierced for the first time when I was 25, took it out because I was told by a school I didn’t get a job with them because I had piercings. I re-pierced it after Dad died and dyed my hair back from gingery blonde to dark auburn as I already had a job in a school then.

I don’t yet have a tattoo. I was very, very tempted to get one in Asia, but I’ve not been able to get my Hep B booster, so I thought I’d better not. My main problem, however, is that I’m too indecisive.  There are things that I’d like as a tattoo but I’m not sure I’ll still like in however many years.  Maybe I should just bite the bullet and get something done.

My other consideration for whether or not to get a tattoo is the job that I’ve chosen.  Like it or not, and I really don’t, you are expected to conform to a certain look as a primary teacher.  I think that in secondary, especially if you teach something arts related, you can get away with a little more of an ‘alternative’ appearance.  But in primary, they don’t seem to give too much leeway.

When I was training as a teacher I didn’t need to take out my nose piercing, although strictly I should have taken it out for PE lessons.  There were others with tattoos who decided that they should cover them up during school.  For some tattoos, I can understand this – for example a semi naked pin-up girl perhaps – but on the whole these were small, discrete, no reason I could see to cover them.

This actually really annoys me as it makes me feel like I can’t dress in any way that isn’t conservatively – I know that there are dress codes for practicality reasons, I don’t wear skimpy, revealing clothing and don’t think it would be appropriate for a classroom, but what’s the problem with having different coloured hair, or piercings or a tattoo or two on show? Seeing someone with some form of body art isn’t going to scar a child for life.  One of my friends didn’t get accepted on a PGCE course because she had dreds, so they said they’d have problems finding placements for her.  I would have thought that educational institutions should have a role in teaching children that it’s alright to be a little different to the mainstream and that someone isn’t to be avoided or ostricised for looking different.

But I think I may have found a way around these issues.  I’ve now learned how to henna myself.

I first had it done in Tanzania, just before moving home.  It lasted about 4 weeks and the woman who did it was amazingly talented.  She went from my shoulders down both arms and did both of my feet in about and hour and a half, all of the design freehand and with no guide pictures to follow.

My next go was in Little India of Kuala Lumpur, as I was again leaving somewhere.  This was a lot more expensive, so I only had my hands and one foot done. 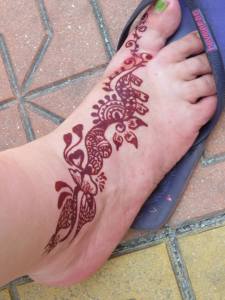 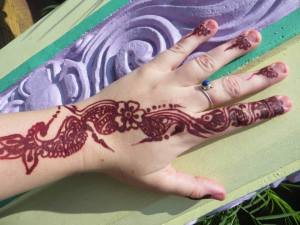 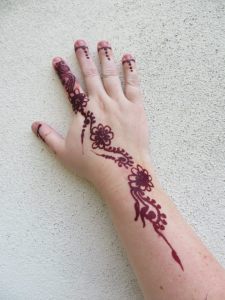 My two annoyances with this set of designs are that a) my right hand looks really stubby with lines under my nails and b) she washed it off after about 15 minutes so it barely lasted past a week.

Still, it gave me a blank canvas and reminded me how you do it.   I did some doodle practise designs and bought some henna cones at the national and off I went having a go.  To start with I tried doing my left hand, as a right hander, my right hand and arm will forever be naked.  Then I got the hang of it and had a go at my feet –  trickier on the whole as I don’t bend well whilst in many layers for a chilly-ish festival.  But this is what I came up with: 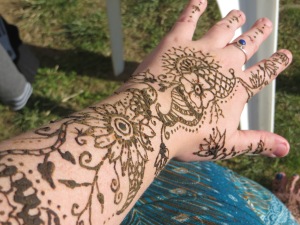 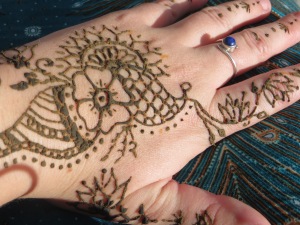 At St Albans Festival I had left over henna and a fair bit of free time on my hands.  I didn’t take any pictures of the work in progress as I got quite carried away doing mine and other people’s but here are some dodgy pictures of the finished result. 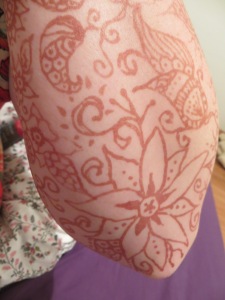 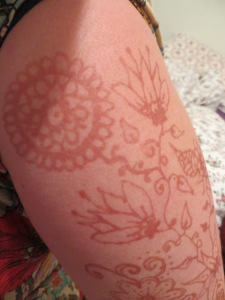 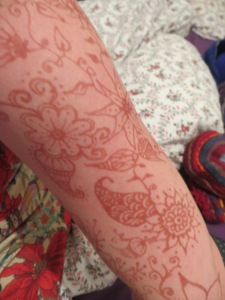 I think it’s fair to say I got quite into it.  It’s not all very good, but there are aspects I like and now that the bits from the National have worn off, I’ve got loads of room to get started again.  But I think I’ll leave it for Fiji and see if i have any new design inspiration!