I’m aware how slack I’ve been, so let’s have some retrospective mini-ish posts while I wait for my washing to get done here at the Base Hostel in Wanaka, New Zealand.

A little over 6 weeks ago I landed in Melbourne and started my Australian sightseeing by taking a trip to Melbourne Museum.

I had a few great surprises there.  Firstly, because I have a student ID card, I got in for free! Brilliant, there’s nothing more I love than free entry to museums.  It’s something that we have in Britain, but not everywhere else has the same great opportunity.

There are some amazing things on display there, there’s a rock that holds the oldest crystals formed on Earth, they are 4.3 BILLION years old and you are allowed to touch them! So obviously, I did.

I love that there are museums that allow a decent level of interaction.  I’ve been to many that are just things behind cabinet doors, or poorly labelled, and I can’t help but think that they would bore so many people.   When I visit a museum I always have a little part of the back of my mind thinking things like ‘What could I do with a group of children here?  What would they want to find out about?  What would catch their eyes?  Could I make some sort of scavenger hunt? Would they enjoy it enough to come back with their families?’ 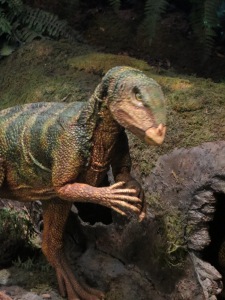 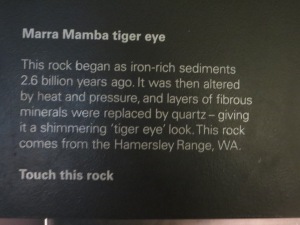 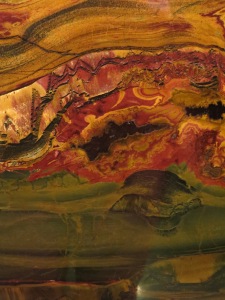 Melbourne Museum has loads for children to do, see, explore, as I found walking around. There’s a dinosaur walk with examples of dinosaurs and giant marsupials that lived in the region.  There’s a forest area with real trees in, an exploration of the human body and the mind and lots more besides, but the exhibit that interested me the most was not even looked at by anyone I saw in the time I was gazing in wonder.

I need to back up a little and explain that I listen to a radio programme from Radio 4 called In Our Time.  I’ve probably mentioned it before, but I love it. Basically, Melvyn Bragg talks to 3 academics for about 40 minutes on a topic from history, science, religion, philosophy or literature.  I used to listen to them on the bus to university during my PGCE and they helped kick start my brain and get me an overview of  many different topics.  It was one of these programmes that made me stop and smile when I saw some tiny little fossils in the geology area.

‘In 1946, an Australian mining geologist named Reginald C. Sprigg was exploring a range of mountains north of the city of Adelaide, Australia, known as the Ediacara Hills. Serendipitously, he found fossilized imprints of what were apparently soft-bodied organisms, preserved mostly on the undersides of slabs of quartzite and sandstone. Most were round, disc-shaped forms that Sprigg dubbed “medusoids” from their seeming similarity to jellyfish. Others, however, resembled worms, arthropods, or even stranger things.

Initially, Sprigg thought that these fossils might be Cambrian in age, but later work established that these fossils are in fact late Precambrian. These were not the first Precambrian soft- bodied fossils to be found and described — scattered reports of them had appeared in the scientific literature as far back as the mid- nineteenth century. However, it was the first diverse and well- preserved assemblage of such fossils to be studied in detail, and it helped spark a surge of interest in Precambrian paleontology. The Ediacara Hills gave a name to the entire “Ediacara biota” of the late Precambrian. Appropriately, the name “Ediacara” comes from an Aboriginal language expression meaning “veinlike spring of water” — the “spring,” perhaps, from which complex animals have arisen.’

I was perhaps overexcited to see them and stood looking at them in detail for quite some time.

If you’d like to hear the podcast about the Ediacara Biota, you can download it from here: