“…So they went down and they sat on the pier
He said I bet you got a boyfriend but I don’t care
I got no one to send a letter to
Would you mind if I sent one back here to you?”

Travellin’ Soldier by The Dixie Chicks

When I was younger, one of my favourite things about school was being able to write in ink with a fountain pen.  It was brilliant.  Making the first mark on the paper, knowing that it would stay forever, blemishing the crisp white sheet in the best possible way.  The scratch of the nib across the paper; the occasional blot if a hair got caught in the fine metal, dragging an extra bit of ink with it as it moved across the page.  I had at least three fountain pens at any one point – one for blue or black ink as the school required and the other two with purple, pink, turquoise, red green, whatever I could get my hands on from WHSmith.  I know I wasn’t the only 13 yr old to do this, but I wonder if it happens much any more.

I hated writing thank you letters, especially after Christmas, on Boxing Day, being sat down with a list of what I got to diligently copy out a seemingly endless number of letters to aunts and uncles and grandparents to thank them for their gifts.  There were probably less than ten to write, but it felt like forever was being taken up, precious time that I could have been using my ‘My Little Pony’ fashion catwalk, or chemistry set or Duck piano…

Writing letters is not fashionable any more, sending things in the post often gets forgotten – my niece’s birthday card was in my bag for three days before I posted it this afternoon and her birthday is today (sorry!) – people don’t like the cost of stamps, the lack of instantaneous acknowledgement of their input into the world, the delay in response.  We live in an instant world now.  Who has time to wait for ink to dry?  We have twitter, facebook, snapchat, instagram, wordpress and many more to get our instant fix.  But what is there to leave behind with those?

I don’t have a lot of my stuff with me at the moment, it’s still in storage until I find somewhere to live more permanently, but I was sorting some bits and bobs earlier and found some interesting things.  The thank you note from my nephew written in August thanking me for his present.  A note I wrote to Dad when I was little with stickers and 11p stuck to it.  A letter from a friend, written two and a half years ago, 4 pages of A4 written entirely in uppercase, in biro, talking about very little in particular, but that makes me smile.  A card from my flatmate of first year of uni that marked the leaving of our first year flat, but that included acknowledging that we were living together the next year, that I was a loser (in a nice way) and that I fancied Gene Kelly.  I did and I stand by that. he was gorgeous in his day.  A 21st birthday card, short and succinct with the Penguin of Death on the front.  Two cards given to me on the day of my final recital at university, one which simply says ‘I know you will do well, good luck’, the other which has a longer message but equally as supportive.  A photograph of Dad in the 1950s with ‘Donald, Blarney Castle’ written on the back by mu grandmother. A calender that I made from paper I had marbled in school, a letter on the front with a stamp of a postman and a small tear away calender stuck on from 1992.  The letter on the front is addressed to Mr and Mrs Skinner and it’s strange to think that neither of those people exist in the same way anymore.

Things that I have kept, letters, notes, photographs.  Handwriting.  Something that is individual for every single person and tells you something about that person.  When we were going through Dad’s things and having to get rid of a lot of stuff I felt terrible binning things he’d written on.  When Alex and I went to get something of Dad’s valued I almost burst into tears when I saw the labels on the envelope because he had written it.

Obviously I am a fan of online communication, otherwise, why have this? But I’m going to try to write more, by hand, and send it to people.  Take the time to chose the paper, chose the words, the style, the meaning, the everything.  Because when someone has died, or left you in one way or another, you might spend time flicking through their facebook or instagram or twitter, but that’s not the same as being able to hold and read something that they spent time on just for you.  I can read through Dad’s facebook but it’s not the same as seeing the effort he put into drawing an early Ford or a morris dancing mole.  Yes, I salvaged both of these things from the tip. I’m going to leave little notes around school to hopefully make people smile, I’m going to let people know that I think of them beyond facebook telling me it’s their birthday so I should write something on their ‘wall’. 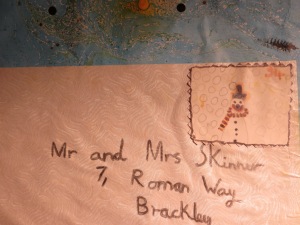 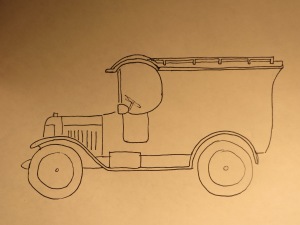 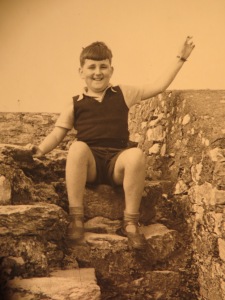 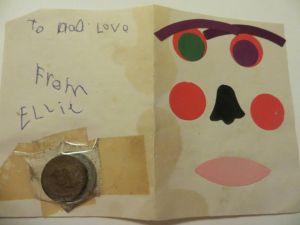 “Well, she wrote me a letter

Said she couldn’t live without me no more
Listen, mister, can’t you see I got to get back
To my baby once more?

Anyway, yeah gimme a ticket for an aeroplane
I ain’t got time to take a fast train
Lonely days are gone, I’m a-goin’ home
‘Cause my baby just wrote me a letter“

One thought on “So the letters came…”