I was reading over a book that I want to read to my class – The Wee Free Men  by Terry Pratchett – and early on, Tiffany, our 9 year old heroine is thinking about the word sussuration and how much she likes it.  It’s the sound of wind through leaves or grass and it alerts Tiffany to something odd that’s about to happen.  I love that sussuration is included in a children’s book.  Would you get a word like that in the rainbow fairy series of books?  Would you get a word like that in one of Katie Price’s children’s books?  In Beast Quest? Or even in Harry Potter?

I’ve been thinking about words a lot recently and was prompted to write this by watching an episode of QI this evening.  Apparently the collective noun for kittens is a kindle.  Collective nouns may be some of my favourite words.  On a trip to London last year I found a book and set of alphabet flash cards with illustrated collective nouns.  Originally I bought the flash cards as a birthday or Christmas present for my older brother, but then decided he’d not appreciate them as much as I do, so I kept them with the plan to frame them and hang them somewhere – probably going up the stairs or something – when I have my own house. 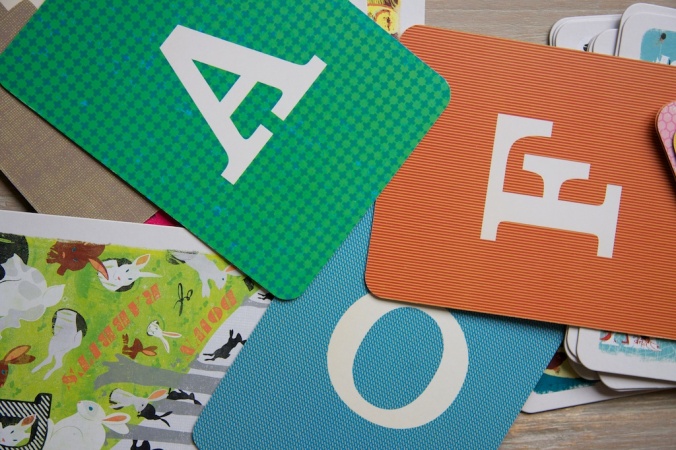 Why do I love collective nouns? Why do I think this could be interesting to anyone outside of my head? I can’t really answer these questions, other than they make me smile, they paint pictures in my head and sometimes there is some really good alliteration.  And perhaps other people will start to discover a joy of words that often gets drummed out of us by our education, or rediscover words that they’d forgotten they’d known.

An ostentation of peacocks

a troubling of goldfish

a siege of herons

a galaxy of starfish*

a parliament of owls

You get the idea.  The flashcards, I think, are beautiful.  Here’s some examples: 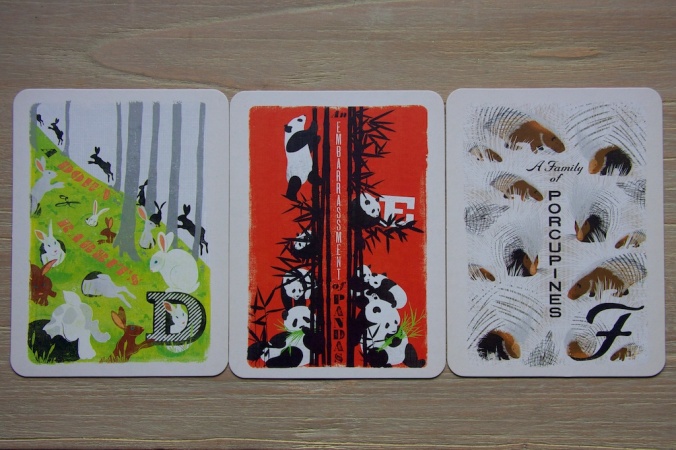 We often dumb down our language or alter our choice of words depending upon the audience receiving them.  We limit ourselves so that we aren’t judged by others as being ‘too clever’, or a ‘know it all’ or ‘being a bit pompous.’  It’s a natural thing to do, I am always adapting my vocabulary choices depending on who I’m with or what I’m writing.  I think it shows that you have a good command over your language.  But why not sometimes stretch yourself and those around you, why not try to describe how you are feeling in a different way instead of the stock phrases we all reach for – fine, OK, good.

How many of your 20,000+ words do you think you regularly use?  I’m on a tiny percentage I think.

I often use quotes from films and songs in this blog and, unless I am writing an aside about a person or group of people I’ve observed, all the titles are quotes.  This has two reasons –

1. if someone searches for that quote or song this blog should show up and someone might read what I’ve written

2. often other people’s words are better than mine or more succinct to put my idea across.

In the past I’ve put on my Facebook that I wish everything I say was scripted by Aaron Sorkin or Stephen Sondheim.  They are geniuses and I love the rhythm and the tone and the intelligence and the vocabulary.  Not sure what Aaron Sorkin’s words sound like?  Have a look here and then please comment below if you disagree with me and you don’t think that your life might be a little better if you could articulate yourself this well.

And Sukie dear- you are!!

If you only click on one of the many links I put on here, then make it this compilation from the TV show Psych, with many of the pseudonyms that Burton Guster is introduced with.  They had great fun writing that show. Someone please make me a T shirt with all of Gus’ names on it. Thanks.

I’m currently doing a very unscientific survey on Facebook about people’s favourite words and will let you know what I find out later in the week.  If you want to add any of your favourite words or phrases then please comment below.

*according to Octonauts, we call them sea stars now.  But then I still call Pluto a planet.^

One thought on “More than words”

Let’s ignore the horrible wall paper (renting, eh?) and glory in these gorgeous flowers and the fact that the cat hasn’t attacked an eaten them yet! #flowers #engagementpresent #picturebyme #floraldisplay #lillies #feltedlandscape
Came home from work last night to find the hugest bunch of flowers for me and David from the lovely @angiecbaggley and family! Thanks so much Claire, they’re lovely and I’ve got them safe from the cat who just wants to eat them. #lovelyfriends #engagementpresent #lookattheprettyflowers #flowers #biggestdelivery
I spotted my niece amongst nearly 5000 people. I should read Where’s Wally books more often. #youngvoices #sheffield #whoistonyhadley
He’s editing his website (with occasional photo help from me) so I’m working on a blanket... #crochetersofinstagram #attic24inspired #neatwavepattern #presentmaking #websitebuilding #standupcomedian
“All you need is love...” and a hibiscus and beetroot tea! Luckily I have both, a book to read and two days off. #tea #tealoversofinstagram #t2tea @t2tea #chillinbeets #finishedwork #timetoread #bookloversofinatagram
Last day of the temperature blanket which marks our anniversary and on Christmas Day he asked me and I said “yes please”. Because manners cost nothing. I’m working tomorrow so today is food, blankets, reading a book together and maybe a film. #crochetersofinstagram #guesswhosgettingmarried #engaged #newyearseve #oneyearanniversary
My Tweets
%d bloggers like this: