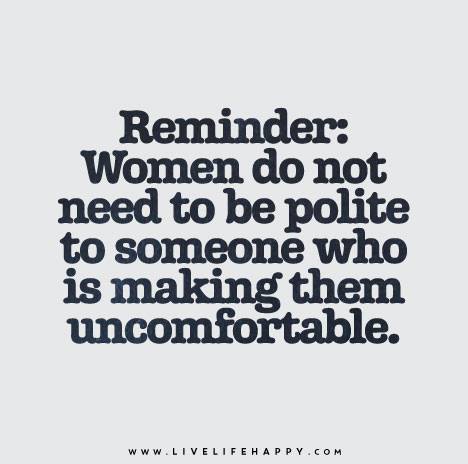 As regular readers may know, at the moment I am looking for work.  I’m doing volunteering and applying for loads of jobs but no luck yet.  It’s only a matter of time.

What this does mean, however, is that I have to regularly go to the job centre so they can see how I’m getting on and I can get a small amount of money to live on.

About a month ago I had an interview at Sheffield Uni and then had to go in later than usual to the job centre.  Everyone was on their lunch, but I had to go and pick up a little boy I was babysitting, so the supervisor agreed to see me and was lovely and very helpful.  She was going to head downstairs with me to find some extra forms that might be useful for me, but just had to deal with something else, so asked me to wait a second.

Now since I had been to the interview, I was a little dressed up – a 1930s style green dress, cardi, heels and even had foundation and mascara on.  I got up from my seat, started putting on my coat and one of the security guards came over to keep an eye on one of the other visitors and started talking to me.  He said I looked nice, I said thanks, I’ve been to an interview.  He didn’t ask how it went but asked me if I had a boyfriend.

I pulled a face.  I got a bit flustered.  I felt uncomfortable.  I was not expecting it – from anyone, let alone a guy that I would estimate was in his mid 50s – so I muttered ‘no and it’s not something I can really be bothered with,’ to which he replied, ‘I’ll not ask you out for a drink then!’

What I wanted to say was ‘NO, YOU SHOULDN’T BECAUSE THIS IS NOT THE PLACE AND WHAT MAKES YOU THINK YOU CAN COME UP TO ME AND ASK ME OUT WHEN YOU KNOW THAT I HAVE TO COME HERE IN ORDER TO EAT AT THE MOMENT??’ but of course I didn’t.  I kept my mouth shut and went downstairs with the supervisor.  I didn’t mention it to her either.  I was really angry and annoyed.  But I didn’t want to get him in trouble.

I mentioned it to my housemate later on and he didn’t really think it as on.  I told one of my female friends, who said that it was a bit out of order, but also didn’t I find it flattering?

No, I didn’t.  I can see why she suggested that, it’s nice to be be asked out sometimes, it’s pleasant for someone to like the look of you, especially if you’ve put a bit of effort into your appearance.  But I was not going out in order to get attention from men or anyone.  I was going to get a job, a well paying job that I was fully experienced and qualified to do.  I had made an effort in my appearance in order to show that I would fit into a professional setting, rather than my everyday clothing choices which tend to make me look like an over-sized toddler.  So, no, I didn’t find it flattering.  I was angry because I felt that this man was taking advantage.  I felt uncomfortable but I turned him down – would other women in a similar situation feel able to do that.  Could this man perhaps make things difficult for them at this official office which could result in further financial difficulties?

The following week I began to dread having to go in in case this man a there again.  I was still angry and annoyed that I’d not said something straight away, but the advisor I saw this time was a man and not my regular advisor.  I didn’t feel like I could speak up.

Another week went by and I got my regular lady.  We went through my job search and the feedback from the interview (I came across excellently, very confident, good ideas and answers, I was close second – the person they hired had a little bit more experience, can’t argue with that!)

Almost as an afterthought I told her what had happened a fortnight before.  I said I didn’t think he was being malicious but I didn’t think it was appropriate and that I didn’t want other people to be put in the same position. I described the man in question and as I did he walked over to the area we were in, stood behind her and was watching us.  She encouraged me to put it in writing because I shouldn’t be made to feel uncomfortable about going in there.

This was around the same time that Unbreakable Kimmy Schmidt came out on Netflix.  I watched the whole thing in about 3 days.  If you aren’t familiar with it, Kimmy and 3 other women were rescued from an underground cult, where they’d been held for 15 years by their ‘reverend’. 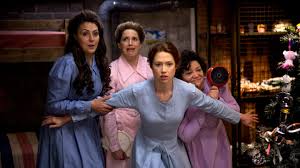 When they are released they are interviewed and asked how they ended up being in the cult and one girl says she was a waitress serving the reverend and he said he wanted to show her some kittens in his van and, well, she didn’t want to be rude so…. 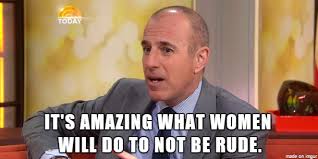 Now, obviously it’s highly unlikely that the guy asking me out at the job centre would then keep me in a cult for 15 years, but it did make me think about officially reporting what had happened.  I’ve found myself in bad situations because I didn’t want to be rude, I didn’t want to upset the man I was talking to, I didn’t want to offend him.  I even ended up going out with my first boyfriend because on the whole I’m a polite person and felt bad that I’d upset him by turning him down.  That did not go well at all!  And actually, do you think the security guard thought about whether he was making me feel uncomfortable, or awkward, or even gave one thought about whether asking someone out in that situation was the right thing? I don’t.  He probably thought I should be flattered.

I think women and girls are brought up to not offend people, to not speak out about things like this.  To think that if a man wants to go out with you then you should be flattered, whether that attention from a man is wanted or not.

So I wrote a letter outlining what had happened, requesting that he not be there when I was due to come in.  I said I don’t think he had malicious intentions, that he probably thought he was being nice, but I didn’t think it was a suitable environment to be hit on.  That since he is a member of the security staff he is in a position of power over the users of the jobcentre.  I sent it late Thursday night, when I was due to go in on Friday.   He wasn’t there.  My regular advisor told me he had been re-assigned to a different job centre earlier in the week, which leads me to believe that perhaps something else had happened, as I had not officially complained at that point.  I also got a reply letter from the centre manager apologising for this man’s behaviour, thanking me for my complaint and bringing it to their attention.  He will not be working at my job centre anymore and that they agreed that this was inappropriate behaviour.

Annoyingly, I still feel slightly guilty about reporting him I don’t want anyone to lose their job, it’s not a great time to be unemployed, but I really shouldn’t because, in my view, I did nothing wrong and he did (and I appreciate that some of you may disagree).  He was in a position of power and influence and people who have to attend a job centre are vulnerable – financially, emotionally.

I’d love to hear what you have to say about this, have you had a similar situation?  Have you reported someone for something like this? Have you chosen not to?  Please leave comments below!