As a person who grew up in a reasonably small market town, I love being in a city.  There are so many more things to see and do, places to explore than there were back home.  But, I grew up with Summer holidays spent searching for bullhead fish and sticklebacks in the river, climbing the ruins of the viaduct before I knew what a viaduct was, playing on a broken down, abandoned digger in a field, sitting on fences watching the sun start to set, heading out on scavenger hunts for rose hips and different grasses.

So much as I love twisting, turning streets, brick and steel buildings, roads filled with buses, trams and terrible drivers, sometimes I just need some grass, trees, leaves and flowers.

I’ve now lived in Sheffield for a year and I’ve barely explored its magnificent green spaces.  I have made a concerted effort to get out and about a bit more.

A couple of months ago, I packed a bottle of water, a scotch egg, a penguin biscuit and some crisps, got on the 85 bus heading out of town from Hillsborough to go exploring.  I was headed for Wheata Woods, in search of bluebells.

I got off the bus, strolled through the village and somehow managed to find a small trail around the back of some houses and within about 15m walk I was in another world.  There wasn’t much traffic in the village, but the little noise that drifted from the road was obscured by the rustling of the leaves as the wind danced through the canopies of the trees.  The path in front of me diverged; I could continue along a foot-worn trail or follow the wide, well-kept path.  I chose the trail, winding my way past holly bushes, tree roots and fallen branches to head deeper into the wood.

I found a bench next to a tree surrounded by the glorious bluebells.  I sat and basked a while in the warm, dappled light and continued reading my book – Tender Morsels by Margo Lanagan.  It felt so comfortable and right to sit there, becoming engrossed with the tale of a woman and her daughters, living in their own world, away from the terrible harms they faced in the real world.  Their private world is filled with woods, streams, plants, animals, men turned to bears and a shy, quiet child can become friends with a wolf.  The sound of the countryside around me, the movement of the trees, grasses and bluebells, the faint trickling of a distant stream all combined with the words I was reading to make me feel wonderfully and comfortably along in the world.  The scent of the bluebells wafted around me and for about 40 minutes I didn’t see another person.  The solitude was marvelous.

I came to a natural pause in my book and decided t move on if only to prevent a numb bum!  I wandered along the path, occasionally spotting someone walking their dog to my left.  Up ahead to the right was a dry stone wall, separating the wood from a freshly cut field.  The difference between the quiet order of the farmland and wall compared with the sprawl of the vegetation in the forest was quite beautiful.

I walked for a couple of hours, following the edge of the wood with the intention of looping around to my original entrance but I came across a boggy patch where two streams met and my shoes began to leak.  I doubled back on myself and tried to retrace my steps.  At some pint I took a wrong turn, the deciduous trees, oak, birch and beech, giving way to pines and conifers.  I’m not going to lie, for a while there I was a bit concerned that I was a bit lost, with only a photo of the wood’s map on my camera to help me!  But 12 years ago, I took AS geography, last year I wandered for miles looking for caves in Laos and I can navigate my way around the London Underground.  I wasn’t going to let a Yorkshire wood swallow me up forever.

I kept walking, found a farm in the middle of the pine forest, so I thought there was a highly strong likelihood of bumping into a road at some point, and I did, although it seemed to be mainly an access road for logging.  After about 15 minutes of following it I found a marker telling me I had joined the Trans-Pennine Way, running between Outibridge and Sheffield.  I feel that Mrs Courtley-Green and Mr Chambers would be proud of my survival skills.

Shortly before finding the marker I had texted my housemate, Tim, saying “I think I’m a bit lost, if I’m not back by midnight, wait a bit longer.”  He kindly replied that if I made it to a village, he would come and pick me up.  It wasn’t necessary.  About ten more minutes f following the stone covered road I found the Wheata Woods car park and to that wide path I’d first avoided back at my starting point.

I sat on a tree stump, ate my scotch egg and caught my breath, the mild panic at the thought of being lost in the woods drifting away as I watched a pair of squirrels chasing each other around a nearby tree.  I didn’t want to leave this world, where the wind blowing through the trees sounded like the crash of waves on a beech; where people had left tiny tributes to lost loved ones; where I felt that I could exist on my own with a book, a notepad and pen and a camera for company.  But we all have to return to reality at some point, so I followed the path past the fallen branches, the holly bush, the backs f the houses, onto the road and back to the bus stop. 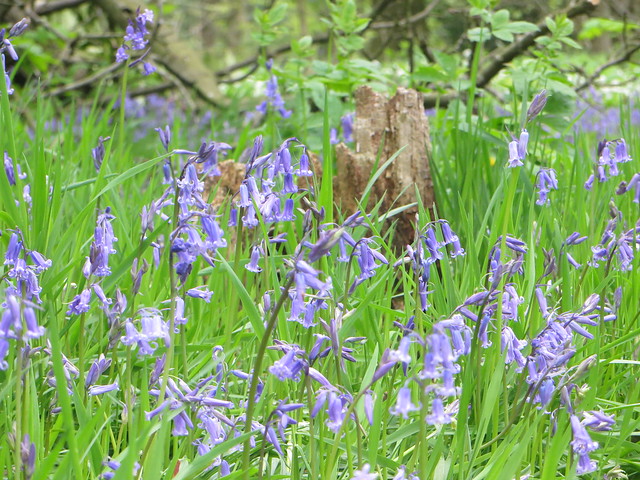