I’m not really one to follow trends, I’m rubbish at knowing what’s cool, what’s not, I mostly stick with stuff I like and if it happens to be something that fits with the world’s view of cool then so be it.

Bullet journaling has really taken off – my former boss introduced us to the concept as a way of managing tasks about 18 months ago, but it didn’t really click for me.  For the uninitiated it’s a system of organizing your time, tasks, activities; it’s a to-do list, a diary, a sketchpad, notebook, pretty much everything you can think of and want it to be.  When Jess told us about it it was not really something I needed.  My job was running the cafe and so making plans of what I needed to do took a back seat to actually doing it, but now things are different.

I’ve now got two jobs, volunteering and am attempting to make stuff and have a small social life too.  I work from a small diary to keep track of which job I’m meant to be at when, but now that doesn’t seem to be enough.

At the start of this year, Genevieve at job no. 2 showed me the start of her bullet journal and this, coupled with the fact that I’d got a Paperchase voucher, meant that of course I needed to give it a go because I’m a sucker for new stationary.

Do you still get the urge to rush out to WHSmith’s every September to get new notebooks, ring binders, pens and geometry set?  I really do.  I’ve been out of the education system for 11 years, but every new academic year I feel that longing to get new stuff ready for the start of school or university, as though the old stuff just won’t cut it any more, I’ve chewed through all the pens and pencils, notebooks lie forlornly half filled with ideas and snippets.  I don’t even really need a geometry set anymore, it’s very rare that I can put to good use my set square or protractor.  I couldn’t even remember the name of the protractor, I’ve actually had to just look it up in order to write this, but I know I want, no need, a new one each Autumn.  I know I’ve been conditioned to feel this way, in the same manner that while watching ‘Bake Off’ I’ll find myself suddenly with a mixing bowl in my lap, creaming butter and sugar together without really having realised it….  September for me is changing leaves, conkers shiny shoes and needing to give myself a restraining order for a stationary store.

I started gathering the stationary bits from around my room – collecting the coloured pencils, pens, a mini ruler and bought myself a blank notebook with dots instead of lines and then my mind went blank.  What should I include? What should I write? What would be useful? Can I fit in time to fill it in?  Then I stalled for a week.

Desperate for inspiration I signed up for the official newsletter, I fell into the twin rabbit holes of Buzzfeed and Pinterest – gorgeous pictures of layouts with fancy fonts, doodles, weekly and monthly trackers… It all seemed a bit beyond me. 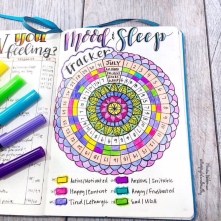 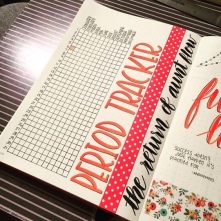 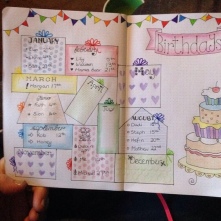 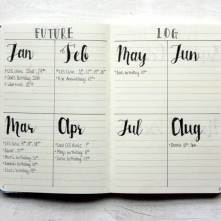 I’ve got stuff like washi tape and stickers at home and could have easily gone crazy ordering templates, stencils and all that jazz but I don’t think that would be much use for me at the moment.  So since I was stuck as to how to start I’d set myself a mini reward – get my admin that I was avoiding out of the way and then I could doodle the front page using my lovely book that shows you how to draw European Folk art style stuff.

When I started building my bullet journal, I began with a birthdays page and a calendar page – I managed to write in the 20th of May twice, therefore throwing off all the following months and I’d done it in pen so couldn’t change it.  Instead, I cut out some coloured paper, stuck it in and then had a new section for ‘important events I need to plan for’ sort of thing.

I dedicated a page to good things that happened in the month because, as a depressive and as a human, I tend to focus in the negatives more than I probably should.

I set up a week to view with events, work and crafts as well as water intake. As I’ve not had much of an income over the last few years, I’ve not had much of a social life either.  A trip to the cinema seems extravagant now, so I’ve included classes, workshops, hanging out with people as ‘events’.  Work was second because I have to track where I should be and when and crafts had the biggest section because it needs to be more incorporated in everything I do if I want to start making it more of a business venture.

As time passed I decided that I didn’t like the layout I’d chosen, so I changed it to some triangles and added colour.  I’ve incorporated a Feminist Quotes page, a book shelf to add the books I’ve read and, as I realised I’d been listening to podcasts more and the book section was looking a bit sad, a podcasts page.  I’ve added some film tickets to list the new films I’ve seen and what I thought of them.

I’m enjoying it more of a record of a year than a proper tool for managing things because I’m forgetful and don’t always fill it in!

My work in progress