The title of this blog post comes from the first line of a book I love ‘The Musical Life of Gustav Mole’.  It’s not a book many other people I know have heard of, but I had it as a child and it was illustrated by my Grandmother’s friend Kathy Meyrick.  The Amazon review says ‘Gustav Mole is lucky enough to be born into a musical family, and this charming tale traces the enriching role that music plays in his life. Gustav’s musical education is rich and diverse, covering a wide variety of genres and styles. This is the perfect introduction to musical instruments, ensembles and occasions, and a humourous and sensitive exploration of what music can bring to our lives.’

Gustav starts off playing pots and pans on the kitchen floor, moves on to other instruments at school and eventually learns violin.  It’s a beautiful book in many ways and that opening line as always stuck with me.  Lucky the mole born into a musical family.  I consider myself to be a lucky mole.  My mother was a dancer, my father probably could have played instruments but didn’t, I think he sang well but it was mostly under his breath.

As I was walking back through Brackley to Turweston this afternoon I was thinking about how lucky I have been because of little things that have happened and how they have helped shape me into who I am now…  I spent years away from music because other things got in the way and I lost touch with people lost confidence in myself and then was a little scared to throw myself back into it.  But spending the weekend at Warwick Folk Festival has helped to change my perspective again.  I had forgotten the friendliness of people within this community, I had forgotten the safe, welcoming atmosphere of a good festival, I had forgotten the enjoyment you can have singing in front of an audience.

If Mum had not decided that she wanted to learn to clog dance, if Delphine hadn’t put up an ad in Brackley Town Hall advertising clog within Owlswick Morris which Mum saw and joined, if Dad hadn’t been keen on the Corries, Fairport Convention, The Oysterband, if there had never been a degree set up in folk music, I might never have taken the path through life that I have so far.

I was nervous about heading to the festival this weekend.  It’s all very well sending off an email asking for a gig when you are living on a different continent, but it’s another thing when all that’s standing between you and singing, on your own, in front of people.  I’m not going to lie, I did think about ringing up to say I was ill and couldn’t make it, but having worked the other side, I know how much hassle that would cause, even though I’m not at all known as a performer.  And were I to have done that, it would have been another example of my self-sabotage, which I am trying to avoid.

So Richard dropped me off at the bus stop, I got the train and started frantically trying to remember songs and roughly time them to help plan my sets.  There was a moment of panic when I thought I only knew 5 songs, but soon they started to come back to me.  A short taxi ride and I arrived at the festival.

My first impression was that it was relaxed and smaller than I’d expected based on the line up.  There were no barriers between the main site and campsites, giving it a more relaxed feel in that respect than others I’ve been to.

My first gig was on the Co-op stage, a small raised platform with about 25 seats in front.  The first half of the show came from The Wild Man of the Woods, who told us tales about the woodland, the history of ‘The Green Man’ and how our modern idea of him may have come about along with songs.  It was great and we had a few chats over the course of the weekend.

Then it was me.  There was one face I recognised in the audience, Maurice, who was vocal in his appreciation of the songs. Thanks for that! And when I was done thankfully people came up to talk to me and tell me they enjoyed it.  It’s always nice when people do that.

Work done for the day I had some amazing jerk chicken, pork and curried goat from the Caribbean stall (take a look at the food blog in a few days for my review) and then I watched the concert featuring Demon Barbers XL, O’Hooley and Tidow and  Jim Moray and the Skulk Ensemble.  They were all brilliant, but the highlight for me was definitely O’Hooley and Tidow, who I’d not seen on a main stage before.  Their nomination for best duo at the Folk Awards was well deserved and I bought their beautiful album ‘The Fragile’.  Although my ipod was sadly drowned in my tent during the festival, once it is either restored or replaced (more likely) I am sure I’ll be listening to ‘The Fragile’ on repeat.

Saturday’s lunchtime concert was in a cafe in town and a slightly different atmosphere.  I didn’t feel quite as comfortable and I think perhaps that came across during the performance, but it’s good practise.  My sister and her family came along to watch and afterwards we headed back to the main festival site, playing ‘spot the castle’ with Imogen.

We didn’t get far into the festival as the kids wanted to watch the morris dancers.  Having grown up with morris, Alex and I are pretty used to the inherent strangeness of it – people dressed in funny colours, bells, flowers, clogs – but the kids were mesmerized.  One asked if they could come in their van and stay sometime.  I think they will also be moles born into a musical family.

Time spent wandering around, trying to get a fiddle fixed, feeding children passed and they had to go and I had to get ready for the next gig.  This one was in the Music Department and I was so tired from being kept up by my tent neighbours I had to sit down for half of it.  I don’t think anyone minded too much and I’ve written my first song based upon those neighbours.   I got soaked heading back to the tent and that’s when I found the death of the ipod.  Let’s just take a minute to mourn a friend of over 6 years.

Sunday morning was crisp, cool and glorious.  I sat and chatted to Jan of Jan’s Van for about an hour or so about anything and everything.  I wanted to get a portrait of her and although it’s not what I had in my head, i still like it.

I had one more concert to do and it turned out to be my favourite.  A sing around style concert ‘Women’s Song’ in the title, me, Rosie Hood and Salvation Jane.  I’d not heard Rosie or Salvation Jane before so when they were singing I was just sitting and listening, almost startled when it came to be my turn.

It was one of the most enjoyable gigs I’ve ever had, relaxed, warm (atmosphere, physically I was freezing!) and I had some lovely chats with people afterwards.  (Seriously, if you ever happen to come to one of my gigs – please do – and want to say anything afterwards, please do, despite appearances I’m not overly confident and it’s helpful to hear what people want to say!)

So I could relax, wander around taking photos and was called over by the lovely Amy Davenport and introduced to her in-laws Paul and Liz Davenport, who very kindly bought me dinner, provided me with an amazing chocolate cake and gave me advice about promoting myself and getting recording.  I’m sure I’ve bumped into them before over the course of my festivals and folking, but it was lovely to talk to them.

Of course there was lots more but if I go on I’ll bore you further, but one of the last things that I heard before I left came from my former boss, Jonathan, who said that the good thing about Warwick as a festival is that children can, even for a weekend, have a bit of a free childhood.  They can go off and wander, explore, play, watch musicians and dancers, try different things in a safe environment.  I think this is part of why I love folk music so much, it’s a community, it’s a family and I’m a lucky mole to have been born into it.

‘Of all the money that ere I spent, I spent it in good company’

Jan told me to take a portrait when she wasn’t looking. This is it. 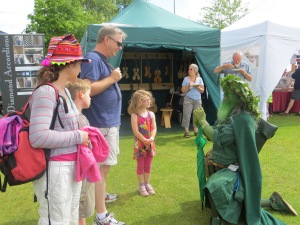 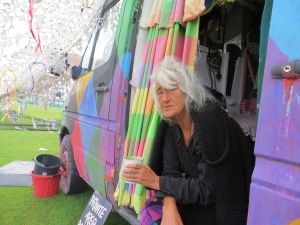 Jan and her Van 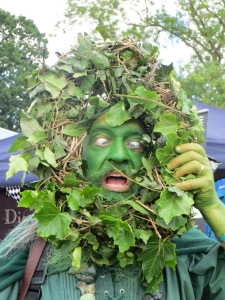 The Wild Man of the Woods 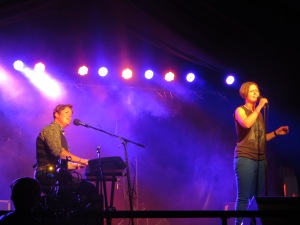 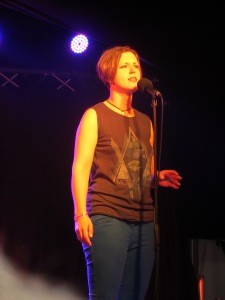 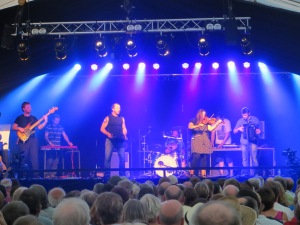 A perfect time for dinner 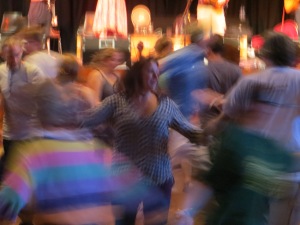 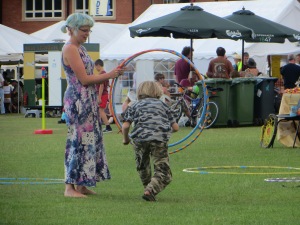 Fun at the Festival

For more of my Warwick Festival Pictures, take a look at my new Flickr page.